It seems that everyone on Facebook is sharing the news that Cheerios is giving away wildflower seeds as part of their campaign to “bring back the bees”. While planting pollinator-loving plants is important for both honey bees and wild bees this campaign by a Cheerios is a greenwash and by sharing it, you are helping them to advertise their products and their products harm bees. 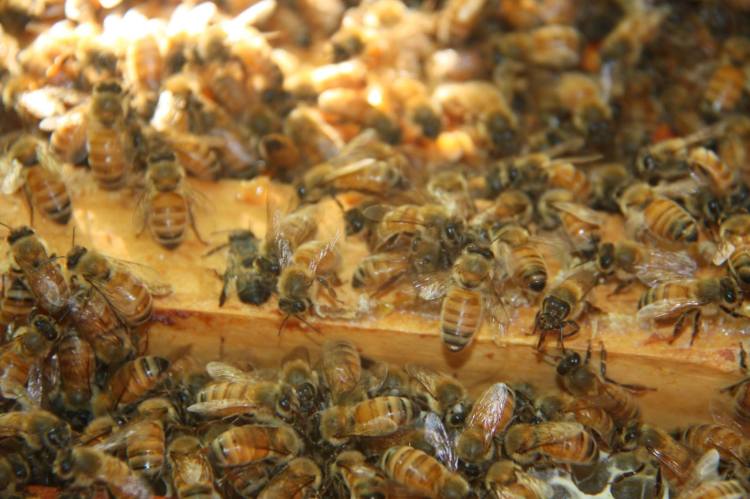 General Mills, the company that owns Cheerios, is multi-national agro-food corporation that promotes the practices of industrial agriculture including mono cropping – widely implicated in the decline of wild bees – and the widespread use of a class of insecticides calls neonicotinoids. Neonicotinoids are a class of systemic pesticides regulated for use in Canada and most other countries in the world (a partial ban in Ontario goes into effect in the spring of 2017).

Neonicotinoids are neurotoxins that affect insects by causing abnormal behavior, immobility and death (Brandt et al, 2016). The neonicotinoid class of pesticides are distinctive in that they are both systemic and persistent. Systemic refers to the fact that they spread to all plant tissues via the vascular system including the pollen, nectar, and guttation fluid (Brandt et al, 2016). Persistent, in this context, means that they are present and accumulate in the environment through various pathways. Even when they are delivered as a seed coating, they can be found in soil, waterways, and nearby plants (ibid). Neonicotinoids are water soluble and can easily be absorbed through plants by both their roots and leaves (Goulson, 2013). There have been indications that neonicotinoids persist and accumulate in the soil for much longer than previously thought (ibid).

There is widespread scientific agreement that bees, especially wild bees, are in global decline due to multiple factors including loss of habitat, parasites, lack of wildflowers, and pesticides (Goulson et al, 2015). Most of the effects of neonicotinoids on honeybees are thought to be cumulative and complex with some researchers suggesting that toxic amounts of pesticide exposure could be reached in the field within days or weeks (Goulson, 2013). Research has shown that cumulative neonicotinoid exposure can affect the learning, foraging, and homing abilities of both honeybees and bumble bees (Goulson, 2013). This may exacerbate the other challenges bees face such as exposure to parasites and extreme or unpredictable weather due to climate change.

Research in the United States on the wax and pollen of honey bees hives detected the presence at least one pesticide and 120 other agrochemicals in each hive (David et al, 2016). This indicates that honey bees in the field are chronically exposed to a complex mixture of pesticides and agrichemicals (ibid).

One study found that bumble bees who foraged on wildflowers near treated crops had higher levels of pesticide contamination in their hives than nearby honey bees, mostly due the shorter foraging distances of bumble bees compared to honey bees (David et al, 2016). This makes General Mills claim that “by the end of 2020, farms that grow oats for Cheerios will house approximately 3,300 total acres of dedicated pollinator habitat on 60,000 acres of land” not nearly as helpful to bees as it seems to be at first glance. Sadly, if pollinator-attracting wild flowers are planted around crops that are treated with neonics, they may cause harm to bees (David et al, 2016).

Although the impact of neonics on wild bees is not fully understood, it is perhaps a more pressing and troubling issue than the impact on honey bees. Honey bees are managed by humans who breed them, manage them, and ensure their survival. It is hard (but not impossible) to imagine circumstances in which the domesticated honey bees will be made extinct. Their numbers may decline dramatically but as long as they are managed by humans, they will probably continue to exist. Wild bees, however, are not managed by humans (with a few exceptions) and are more vulnerable to food and habitat loss. As leading entomologist Laurence Packer argues, the loss of wild bees could cause ecosystem collapse to an extent which we cannot comprehend (2011).

As Dave Goulson, a Professor of Conservation Biology and leading bumble bee researcher argues, “If we want to ensure healthy populations of honeybees, bumblebees, and other wild pollinating insects upon which we depend for our crop production, and more generally if we wish to support the healthy, diverse ecosystems upon which our future health and well-being depend, then we need to find ways to produce food in a sustainable way which incorporates the needs of biodiversity” (2013: 11).

On a large scale the best ways to help bees – both wild and domesticated – is for Governments to ban neonictoinoids and help farmers transition away from mono cropping. But the agro-food industry has fought measures to restrict neonicotinoids – the Grain Farmers of Ontario tried to halt Ontario’s partial neonicotinoid ban. Another important way to  “save the bees” on a large scale is for Governments take immediate measures to mitigate climate change.

As individuals, we can help bees by becoming climate justice and environmental activists. We can also help save the bees by creating backyard habitats for wild bees, planting a wide variety of organic flowers, buying organic food when possible, and never using pesticides. Just please do not help the conventional agro-food industry prosper by advertising their green-washing campaigns. In Canada, the agro-food industry is fighting against a potential ban of one particularly harmful neonicotinoid called imidacloprid. Your seemingly benign share may do way more harm than good. Instead, encourage people to support campaigns to ban neonicotinoids and together we will bring back the bees.

Packer, L. (2011). Keeping the Bees: Why all bees are at risk and what we can do to save them. Harpers-Collins Press.