Today is International Women’s Day – a day that is often promoted as a celebration of women, sometimes promoted as a day of protest a, rarely in the past few decades, promoted as a day of militancy. This year, after the astonishing success of the Women’s March – in which millions of women worldwide took to the streets to protest Trump and the policies he represents – IWD has been infused with militancy that returns it to its historic roots.

This year, a coalition of feminist activists representing over 50 countries has initiated the International Women’s Strike [edited to add: the women’s strike is happening again in 2018]. This was inspired by the powerful examples of women’s strikes (related to both paid and unpaid work) in Iceland in 1975, Poland in 2016, and Argentina, also in 2016. The strike has been a source of controversy – especially in the United States – where it has been accused of representing actions in which “privileged” women can participate (strikes?!?!). The opposition to the strike is most strongly articulated by a certain sector of the feminist movement that is excluded from the women’s strike – the “lean-in”, power feminism that emphasizes getting privileged women into positions of power  while doing little to change the socio-economic system.

The International Women’s Strike, however, returns IWD to its rightful place as a day of action of working-class women. IWD is not simply a feel-good day to celebrate women, it is a day of struggle to honour the militancy of working class, poor, and marginalized women and to push for a feminism that explicitly challenges capitalism. The idea of International Women’s Day was first proposed by socialist feminist Clara Zetkin at the Second International Conference of Women in Copenhagen. Clara Zetkin had been a staunch advocate for the rights of working women within the German Social Democratic party for decades. Some historical accounts wrongly claim Zetkin to not be a feminist – I claim her as one of the most important early pioneers of socialist feminism.

The confusion lies in the fact that Zetkin and other socialist feminists were very hostile to a certain sector of the feminist movement – privileged women who, they felt, were only interested in gaining rights for wealthy women within the capitalist system (sound familiar?). International Women’s Day, as imagined by the Second International Conference of Women, was meant as a day to honour the militant organizing of women workers including their struggles to form unions (such as early textile factory unions), their strikes and other uprisings, and the daily struggles of everyday life. This took on special significance when in 1911 in New York City 140 women, – mostly Italian and Jewish immigrant women – lost their lives in the Triangle Shirtwaist Factory Fire.

The actual day on which IWD was celebrated varied by region and country. In some European countries, socialist and working class women celebrated IWD on March 18 in commemoration of the Paris Commune. In some countries, IWD was celebrated on February 23. Some argue that the day – March 8 – was firmly decided on after an amazing set of events occurred during and shortly after the IWD march in Petrograd, Russia in 1917. To be fair, others argue March 8 was chosen to honour a strike of women workers in NYC in 1908. I am going to use the example from Russia to remind us how strong and amazing the Russian feminist movement was – and will be again. 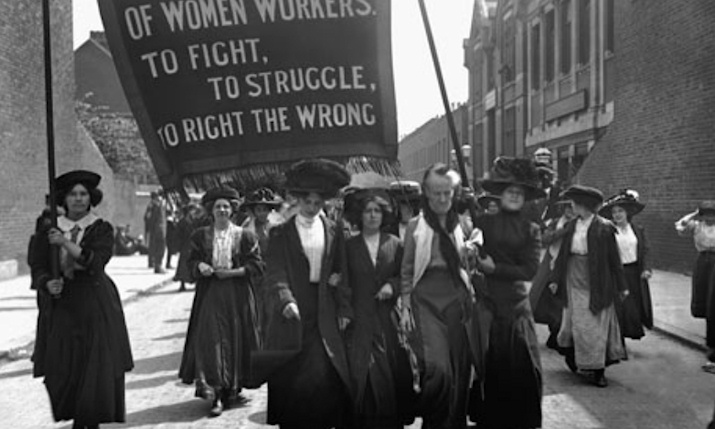 On Feb 23, 1917 (March 8 in the calendar used by Western Europe – Russia used a different calendar), IWD protests in Russia, led by marxist-feminist Alexandra Kollantai, ignited a rebellion that brought down the Tsarist regime. The women were angry with deteriorating living conditions especially extreme rises in food costs. They took to the streets to protest – which turned into a multi-day food riot. According to legend, few men joined them. On February 25, the Czar ordered his soldiers to trample and, if necessary, shoot the women protestors, after which things escalated rapidly. A few days later the Czar was forced to abdicate and thus began the Russian Revolution. No wonder women’s militant activist is so feared in our society. It has – literally – brought down a Czar and sparked a revolution!

International Women’s Day is a day to honour all the women who have lost their lives in struggle – either political struggle (RIP Berta Caceres) or the struggles of daily life (textile workers still die in factory fires). It is a day to remember that women’s collective action can overturn draconian laws (Poland, 2016), stand down brutal dictatorships, and bring down Czars. It is a day to honour the women who risked their lives to form unions, to organize workers, to block pipelines, to protest racism, to defend the very Earth from utter destruction. It is a day to remember the women who revolutionized society by challenging the institution of marriage, defying the men in their lives (husbands, bosses, fathers), fighting for abortion rights, standing up to sexist violence, and daring to define their own sexuality and control their own lives.

IWD is a day of struggle for  working-class and poor women – the majority on a global scale who are women of colour. It is a day of militant struggle against sexism in all forms, against racism, and against the socioeconomic system that profits directly from our oppression and exploitation. A women’s strike – whether it be from paid or unpaid work  – is the perfect way to celebrate IWD and honour the women who struggled before us, the women who struggle with us, and our daughters who will struggle after us.