In November 2017, I had the amazing experience of attending the International Permaculture Conference and Convergence in Hyderabad, India. It was my first time at an international permaculture convergence and, more importantly, my first time in India. It was an amazing experience. My only regret is that I didn’t get to see very much of India, which means I have to return someday. The conference and convergence was organized by Aranya Agricultural Alternatives. The two day conference was located at Professor Jayashankar Telangana State Agricultural University in Hyderabad and the five day convergence happened at Polam Farm in the Medak District of Telangana state.

I have heard Vandana Shiva speak several times but her talk in India was especially wonderful. She expressed outrage at the ongoing colonialist manipulation of India’s agricultural system. The “green revolution” in India in the 1970s pushed industrial agriculture on the country, causing many social and environmental problems. Shiva forcefully argued against the new “green revolution” which is mostly aimed at pushing techno-corporate agricultural strategies in the form of GE seeds and increased mechanization. The main problem with GE seeds, as Shiva highlights, is that they corporatize the ownership of seeds. Seeds, instead of being in the hands of farmers and peasants, are owned through patents by agrochemical corporations. Much of Shiva’s anger is directed at the Gates Foundation which pushes “modernization” of agriculture to the detriment of small-scale farmers and peasants in India and in many countries in the continent of Africa. Seed sovereignty is one of the most crucial issues facing small-scale farmers and peasants.

One of the best panels at the conference was about permaculture and the refugee crisis.  This issue is so timely because the movement of people (which has been a cornerstone of human life since we evolved) has increased over the past two decades with war and destabilizations throughout the world. Forced migration will increase, especially as climate chaos becomes the new reality. Every single person concerned with the destruction of the Earth should be working to support refugees. The sharp increase in racism and xenophobia in Europe, North America, and Australia, has made this issue especially urgent. The international panel of activists advocated many strategies for working with refugees and protecting the rights of refugees, including initiatives to bring permaculture to refugee camps to make them more livable for the people forced to live in them.

The conference location in Hyderabad was fantastic but there was something extra special about being at the farm. Living together (we camped) with so many amazing people from around the world, even for a few days, is a powerful experience. We did learn a couple important things. One, don’t assume hot days mean warm nights! The days were extremely hot but the nights went down to 13 or 15 degrees celsius. Many campers (us included) were not prepared for chilly nights. Two, don’t get too worried about venomous snakes and scorpions but wear shoes at night!

The farm itself was (and is) beautiful. It was amazing how a temporary permaculture village, able to comfortably host 500 people (complete with composting toilets, a main stage, and several workshop huts) was created on this farm. The organizers and their team of volunteers clearly worked very hard before our arrival.

Polam Farm had several beautiful demonstration gardens in which they were utilizing a wide variety of methods to grow an abundance of plants. The gardens had clear signs and paths and were easy to explore. 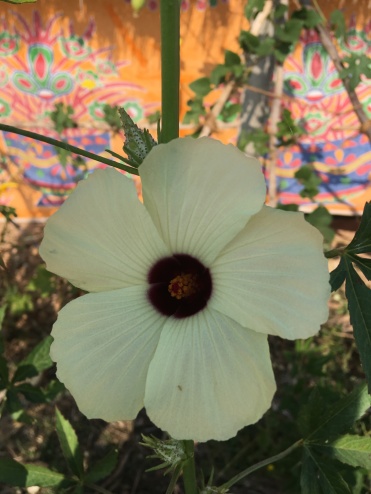 We were delighted to walk past these peaceful cows every morning on our way to our meals (the meals, by the way, were feasts).

An artisan village was set up that featured demonstrations of crafts such as pottery and hand spinning. There was also a day when an amazing array of seeds were not only displayed but shared with attendees. 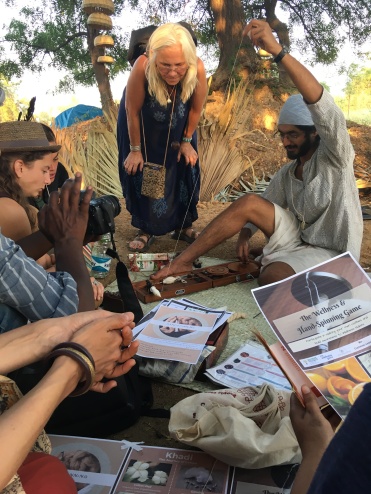 The decolonizing permaculture seasons were not part of the official program. They were organically created and facilitated by an amazing and extremely skilled permaculture activist and teacher, Maria Marasigan. There were four sessions in total and they were, at times, painful and upsetting. It is hard for white people from colonialist and/or settler countries to confront the racism and colonialism that exists within their societies and within themselves. Some people got angry, left the session, and made claims of “reverse racism”. I am so thankful for the people who stayed with the process, especially the facilitator, Maria, and the people who shared their experiences of racism and colonialism within permaculture.

Even though the reactions of some were disheartening, there are many people who are committed to confronting the ways in which racism and colonialism exist within permaculture. Conversations like the one at the IPC are such an important part of the process of making permaculture a truly anti-racist movement and practice than can effectively confront oppression and that has liberatory potential for all.

PermaQueer was also not on the official agenda. A group of queer-identified folks (yes, myself included, callout to my fellow bi femmes!), felt we needed a space to talk about queering permaculture spaces. The conversations were mostly confidential but I can say that it was beautiful, extremely touching, and activating. We made a commitment to work to do two main things:

I have known about the work of Penny Livingston for years as she was one of the teachers of my permaculture teacher, Starhawk. I was very excited to attend her workshop on medicinal forest gardens and regenerative herbalism. My backyard has been evolving into a medicinal forest garden, almost by accident, for the past few years. It already has several mature trees and so it is too shady for most fruit trees and some vegetables. For this reason, and because I try to grow native pollinator plants, I have been planting several perennial plants that are powerful herbal medicines (valerian, black cohosh, skullcap, anise hyssop, etc).

Penny is full of wisdom about growing and using a wide variety of medicinal plants. I loved Penny’s urging that we get to know plants deeply, spending time with them in our gardens and forests, and forming meaningful relationships with them. She described in detail how she creates essential oils from her medicinal forest garden and we were able to smell some off her potent creations. The concept of regenerative herbalism: growing regenerative herbal gardens to heal yourself, your family, and the Earth is one that I hope to explore more deeply over the next few years.

An interesting tension emerged throughout the IPC, one that this blog seeks to address and that I firmly believe must be actively debated within permaculture. The tension was not directly discussed but it emerged for me after I attended two very different talks by eminent permaculture teachers. The debate is this: should we as permaculture people engage in activism while also creating new ways of living autonomously OR should we ditch activism and focus only on autonomous living (autonomous in this case meaning off-grid and as independent from states and corporations as possible).

Starhawk in her talk on Climate Justice and Permaculture clearly supported engaging in activism as well as building permaculture alternatives. David Holmgren, who skyped in from Australia, strongly advocated ditching activism for autonomous living (and explicitly that this should be done by the ‘middle-class’ or at least those living in suburbia in countries like Australia). It would have been interesting if they had debated each other because these two perspectives are not easily compatible in my view.

While I have deep respect for Holmgren I do not believe that we can give up on activism. In fact, I think it is urgent for the permaculture movement to join up with other struggles for a better world such as the climate justice movement, anti-racist and anti-colonialist struggles, workers rights movements and anti-poverty struggles. We live in a capitalist system that causes maximum human misery and environmental destruction and we must collectively confront that system. I do agree with Holmgren that we should build alternative and autonomous ways of living, but we do not need to abandon people who are suffering in order to do so. Retreating from activism means leaving the rest of the world (aside from our eco-neighbourhoods) to the destructive forces of capitalism and I can’t – I won’t – do that.

The amazing people I met!!!

The highlight of the trip was meeting people from all over the world who are engaged in permaculture projects and activism: India, Nepal, Bhutan, Spain, Portugal, South Africa, Kenya, Timor Leste, Guatemala, Argentina, Australia, the UK, the Philippines, Belize, the U.S. and so on. The number of meaningful conversations my partner and I had with people was too numerous to count. We (permaculture people) are truly part of an international movement of people who care deeply about the Earth, non-human life, and other people. I have no doubt that this movement can transform the world.

Jumping off the Stage

As is the tradition at IPC’s participants were invited to make a pubic commitment to the permaculture community about something they pledged to do by the next IPC (Argentina in 2020). Jumping off the stage works in this way: You get on stage, state your pledge and then jump into it (you literally jump off the stage). Everyone in the audience cheers for you, making this simple act exhilarating and meaningful.

I jumped off the stage into the following commitments:

I also offer these pledges to you, my dear readers. I will work to make these things happen over the next few years. Yes I have a PhD to complete (I know some of you are thinking this) and children to guide into adulthood. But I also have work to do in order to make the world a better place. Join me! What will you jump off the stage into?